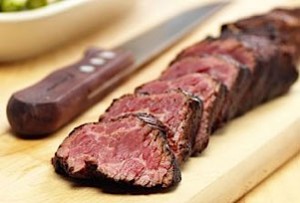 Hanger Steak (also known as butcher’s steak, hanging tender or bistro steak) is a cut of beef steak that comes from the diaphragm of a steer or heifer. Hanger Steak used to be called, “Butcher’s Steak,” because the butchers would keep it for themselves rather than sell it to their customers. Hanger Steak typically weighs about 1 to 1 ½ pounds and resembles flank steak in texture and flavor. Hanger steak is a “V-Shaped pair of muscles with a long membrane down the middle. It is best marinated and cooked quickly over high heat because this cut is not particularly tender. To avoid toughness grill and broil and serve rare or medium rare.

The Hanger Steak is said to “hang” from the diaphragm, which is one muscle, commonly cut into two separate cuts of meat. The Hanger Steak is traditionally considered more flavorful and the outer skirt steak is composed of tougher muscle within the diaphragm. The hanger is attached to the last rib and the spine near the kidneys. Hanger Steak is also a very traditional Mexican cuisine, especially in the north, where it is called arrachera and is marinated, grilled and served with a squeeze of lime juice, guacamole, salsa and tortillas for tacos. In South Texas, this cut of beef is known as fajitas arracheras. Historically Hanger Steak has been more popular in Europe. In England it is referred to as skirt steak; in France onglet; in Italy lombatello; in Spain solomillo de pulmon. In America, Hanger Steak formerly was not separated as an individual cut, but today is extremely popular. Here is an easy recipe to follow that is sure to please!

Mix the olive oil, chopped rosemary leaves, garlic slices, salt and pepper in a large bowl. Place the steaks in the bowl and cover the bowl with plastic wrap. Place in the refrigerator and marinated for 3 hours. Heat your grill, cast iron pan or oven broiler. Add the steaks and cook for 2 to 3 minutes on each side. Slice and plate. Serves 4