The Origins Of Easter Symbols

Home » The Origins Of Easter Symbols 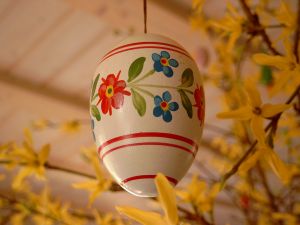 The Origins Of Easter Symbols

Easter celebrates the resurrection of Jesus, but is also associated with popular symbols such as eggs, candy, bunnies and food. Here is a look at the origins of these beloved symbols.

The white blossoms of the lily symbolizes the purity of Jesus. The trumpet-shaped flower that blooms in the spring also symbolizes new life and the resurrection of Jesus Christ. People use the flower to celebrate and enjoy the very essence of the Easter season.

A favorite during spring and the Easter season. Hot cross buns are a sweet, yeast leavened, spiced roll made with currants or raisins. They have long been a symbol of Good Friday. Each bun has an icing cross on top to signify the crucifixion.

The butterfly’s unique life cycle is meant to symbolize the life of Jesus Christ. The first stage, the caterpillar, stands for his life on Earth. The cocoon stage portrays the crucifixion and the burial of Jesus. The final stage, the colorful butterfly, represents Jesus rising from the dead and the resurrection.

In Germany, children made nests in which the “Osterhase” or Easter Bunny could lay his colored eggs. The nests were replaced with baskets once the tradition was brought to the United States and the Easter contents were expanded to include candy and other treats.

In the United States ham has become a traditional Easter dish. In the early days, meat was slaughtered in the fall. There was no refrigeration so the fresh pork that wasn’t consumed during the winter was cured for spring. This made ham a natural choice for the celebratory Easter dinner.

The first official White House egg roll took place in 1878 under the presidency of Rutherford Hayes. Egg hunts and rolls have no religious connection, but some will point out that the roll is a symbolic act for the removal of the stone blocking Jesus’ tomb.

The origin of Easter parades dates back to the mid-1800’s in New York City. The wealthy used Easter as an opportunity to show off their new spring wardrobe by walking up and down Fifth Avenue after church. Soon the less fortunate started showing up to watch the spectacle and a tradition was born.

Second only to Halloween in candy sales, Easter is a holiday for children and adults with a serious sweet tooth. Chocolate eggs and candy shaped like bunnies or eggs are extremely popular. Also, jelly beans are often associated with the holiday due to their egg-like shape.

Easter eggs are likely linked to pagan traditions, but eggs have long been used to celebrate spring and the idea of renewal. It’s not unusual that in almost all ancient cultures, eggs are held as a symbol of life. At the Passover Seder, a hardboiled egg dipped in salt water symbolizes both new life and the Passover sacrifice offered at the Temple of Jerusalem.

The cute furry creature is certainly not mentioned in the Bible, but has nonetheless become the most well-known symbol for the spring holiday. The Easter Bunny’s origins are not entirely known, but some stories date his arrival in the United States back to the 1700’s when German immigrants brought their tradition of an egg laying hare called “Osterhase” to the country. Much like children leave cookies for Santa, boys and girls leave carrots out for the Easter Bunny in case he got tired from hopping around all night.