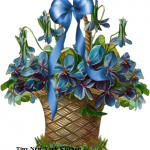 For me, growing up in the Midwest, May Day was a big deal.  It meant that it was the first day that I was allowed to go barefoot.  The ground was still chilly, but it didn’t matter to me because it meant that summer was right around the corner.  It was also a day that I was able to make homemade May baskets, filled with candies and popcorn, and taken to the doors of special friends.  The trick was to set the May basket at the front door, ring the bell and run away as fast as my little legs could carry me in order not to get caught.  I would be surprised if this tradition is still carried on today, but at least I have these special childhood memories to hold on to.

In other parts of America there are other May Day traditions.  In Maryland it is the custom to serve hot rolls for breakfast on the first day of May. In New England, Baptist Cakes are served which are made of bread that has been pulled from the loaf dough and patted into balls or squares.  Then they are fried in a pan and served with maple syrup.  These tasty treats can either be eaten for breakfast or dessert.

In a large size bowl combine the butter, sugar and kosher salt.  Add the milk and water and let cool to a lukewarm temperature.  Add the softened yeast and half of the flour.  Mix well and then slowly add the rest of the flour.  Turn the dough out onto a floured surface and knead the dough until nice and smooth.  Place back into the bowl and cover with plastic wrap.  Let the dough rise until it has doubled in size.  It is important to let the dough rise in a draft-free place. Turn the dough out onto the floured surface again and roll to a 1/8th thickness.  Cut into 2 1/2 inch strips and then cross cut to make squares.  Cover with a tea towel or plastic wrap and let sit for 15 to 20 minutes.  Heat the oil in a skillet (or deep fryer) to 365º F.  Place the dough pieces into the hot oil and let cook for 4 to 5 minutes.  You will want the dough to be a nice golden brown.  Remove from the oil and place on paper towels to drain.  Serve immediately with maple syrup.  Makes about 20 Baptist Cakes.