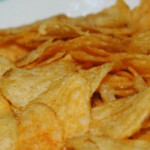 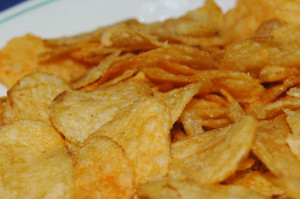 It is thought that the potato chip originated in Saratoga Springs, New York in

1853. According to lore, the original potato chip was created because agitated patron, Cornelius Vanderbilt, repeatedly sent back his fried potatoes because they were way too thick, soggy and bland. Chef George Crum, a resort hotel chef, decided to slice the potatoes extremely thin, frying them until crisp and seasoning them with salt. Apparently, Vanderbilt loved the new “chips” and they soon became a staple item on the hotel’s menu and were called “Saratoga Chips.” In the 20th century the potato chip seemed to spread throughout the United States and began to be mass produced for home consumption. Founded in 1910, Dayton, Ohio’s Mike Sells Potato Chip Company, began producing potato chips and calls itself the “oldest potato chip company in the United States.”

In 1908 Tri-Sum Potato Chips (as the Leominster Potato Chip Company), in Leominster, MA was America’s first potato chip manufacturer. The chips were sold in markets and were usually sold in tins or scooped out of storefront glass bins and delivered by horse and wagon. The early potato chip bag was made of waxed paper with the ends either ironed or stapled together. Originally the potato chips were packaged in barrels or tins. This left the chips at the bottom crumble and stale.

A woman named, Laura Scudder, opened her food company in 1926 in Monterey Park, California. It was Ms. Scudder who pioneered the packaging of potato chips in sealed bags to extend freshness. Laura Scudder began having her workers take home sheets of wax paper to iron into the form of bags. The next day the wax paper bags were filled with chips at the factory. These bags kept the chips fresh and crisp longer. Along with the invention of cellophane potato chips were able to become a mass market product. Scudder also began putting dates on the bags. Her company was the first company to post a freshness date on food products. The new standard of freshness was reflected in the marketing slogan: “Laura Scudder’s Potato Chips, the Noisiest Chips in the World.”

Today, potato chips are packaged in plastic bags, with nitrogen gas blown in prior to sealing to lengthen shelf life and provide protection against crushing.

In America, Australia, New Zealand, Canada, Singapore, South Africa, Hawaii (English) and Jamaica (English) potato chips are called chips. In India (English) they are called wafers and in England they are called crisps. In each of these countries potato chips are thin slices of potato that are deep fried. Commonly served as a snack, side dish or appetizer, the basic chips are cooked and salted. Additional varieties are manufactured using various flavorings and ingredients including herbs, seasonings, spices, cheeses and artificial additives. English crisps, however, refer to many different types of snack product in both England and Ireland. Some of these British crisps are made from potato, but may also be made from maize and tapioca.

Potato chips are a predominant part of the snack food market in English speaking countries and many other Western nations. The global potato chip market generated revenues of $16.4 billion (US) in 2005. This accounted for 35.5% of the total savory snacks market in 2005.

The idea of flavored potato chips was originated by the Smiths Potato Crisps Company Ltd in 1920. Frank Smith originally packaged a twist of salt with his crisps in grease proof paper bags, which were then sold around London. The potato chip remained otherwise unseasoned until an innovation by Joe “Spud” Murphy, the owner of an Irish crisp company called Tayto. Murphy developed a technology to add seasoning during the manufacturing process in the 1950s. After to testing, Murphy and his employee, Seamus Burke, produced the world’s first season crisps, “Cheese & Onion” and “Salt & Vinegar.” This innovation became an overnight sensation in the food industry. CEOs of some of the largest potato chip companies in the U.S. traveled to the small Tayto company in Ireland to examine the product and to negotiate the rights to use the new technology. Companies worldwide sought to purchase the rights to Tayto’s technique. The sale of the Tayto company made the owner, who had changed potato chip manufacturing, extremely wealthy. Tayto remains by far Ireland’s largest manufacturer of crisps.

Potato chips were originally fried and seasoned without any concern for trans fats, sodium, sugar or other nutrient levels. As nutritional intake guidelines were created in various countries and the nutrition facts label became commonplace, consumers, advocacy groups and health organizations have focused on the nutritional value of junk foods, including potato chips. A recent long term study associates potato chips consumption as the most important contributor to weight change. Some potato chip companies have responded to this criticism by investing in research and development to modify existing recipes and create health conscious products. Kettle Foods, founded in 1978, currently sells only trans fat free products, including potato chips. PepsiCo research shows that approximately 80% of salt on chips is not sensed by the tongue before swallowed. Frito-Lay apparently spent $414 million in 2009 on product development, including development of salt crystals that would reduce the salt content of Lay’s potato chips without adversely affecting flavor. 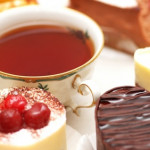 A Proper Cup Of Tea

A Proper Cup Of Tea

I love a cup of tea in the afternoon.  It is a nice break in the day and a nice pick-me-up.  There are many variations on how to make a proper cup of tea.  Here is my version.

Make sure to purchase a good quality tea.  A proper English tea is made with black tea.  The tea can be either loose or in bags.  A real tea snob wouldn’t even think of using bags, but you make the call.  Please avoid the cheap boxed bags that can be found at the grocery store (sorry Lipton).  It is a good idea to go to your local tea shop and scan the shelves for a nice high quality tea that is to your liking.

Purchase a good tea pot.  This is important.  Tea needs to be able to move around in the pot to develop the best taste.  You won’t get a fine flavor by making your tea in a lonely cup.  I like to use a nice English porcelain pot.  They are more expensive, but worth it.

Use cold fresh water.  Please do not use the water that has already been sitting it the tea kettle because your tea will taste stale.  Make sure to put fresh cold water into the kettle.  It is a good idea to use filtered water to avoid any contaminant that might spoil the taste of the tea.  Make sure to boil the water.  Bring the water to a rolling boil to make certain to get the water at the right temperature.  I prefer a stove top kettle, but some people like to use an electric kettle.

Heat your teapot while the kettle is boiling.  Run some hot water into the teapot and let it sit for a few minutes.  Warming the teapot helps to keep the boiling water at the right temperature to brew your tea.  It will keep your brewed tea much hotter for much longer.

Get your tea ready.  Just before the water comes to a boil, pour the hot water out of the teapot and add your tea.  If you are using tea leaves, spoon in a teaspoon for every cup.  I like to add a “plus one for the pot.”  Kind of like a pinch to grow on.  You may want to use a tea ball to hold the loose tea.  If you do use a tea ball be aware that the tea may taste slightly different than if it was loose in the pot as it won’t have much room to move around.  This is important to develop a full flavor.  If you are using tea bags then add two or three to the pot.  If you like your tea stronger then use three bags.

Add the boiling water to the tea.  Make sure that you are adding water to the tea.  Do not add tea to the water.  Leave the tea to steep for about five minutes as it needs time to unfurl its leaves and develop its flavor.  If you like your tea stronger than let it steep a bit longer.  It is a good idea to cover your teapot with either a tea towel or a tea cozy in order to keep it warm.

Pour the tea into your porcelain cup.  Some people like to temper their cup with hot water before pouring their cup of tea (pour hot water into their cup, let it sit for a few minutes and pour it out).  If you have used loose tea, rest a tea strainer on your cup to catch any leaves. It is best to serve the full pot of tea right away.  If you don’t plan on drinking the whole pot right way and then remove the tea bags or tea ball so that the tea doesn’t get too strong and bitter.

Add milk and sugar if you like.  Add these extras only after you have poured your tea.  English tea is commonly served with milk but never cream.  The fat content in cream is too rich for tea’s delicate taste.  Some like to add sugar to their tea as well. Honey is never served in traditional English tea.  I prefer to drink my tea with a splash of milk, but not sugar.  If you like to drink your tea black, you may want to add a slice of lemon.