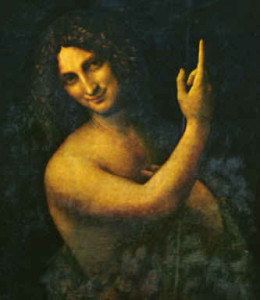 One of the many unique things that we could say in describing St. John the Baptist is that he is truly the "Saint of Summer."  Saint John the  Baptist is one of the most important saints.  Other than the Virgin Mary and St. Joseph, John the Baptist is the only saint who is honored on the Church calendar with more than one Feast Day (the other is August 29th, the day of his martyrdom).  As we can see, both these Feast Days occur at the opposite ends of the Summer season.  John the Baptist saw and lived very clearly his purpose in life and carried it out in the midst of challenges.  He had two important qualities of his life that should inspire us each day.These two qualities are humility and a sense of purpose.

Son of Elizabeth and Zacharias, both already advanced in years and childless, John was born about 6 months before Jesus.  This birth had been announced by the archangel Gabriel to Zacharias, who was struck dumb by the message.  8 days after the birth, having to be circumcised, the child needed a name, and Zacharias succeeded in writing “John,” following indications of the angel; his tongue loosened in the hymn of the Benedictus.  In representations of the birth o the Baptist, Mary is usually also present, assist her cousin Elizabeth, while Zacharias is most often shown in the act of writing.  The name John is from a Hebrew name meaning “Yahweh is gracious.”

This is a great feast of June that is common to countries and has been celebrated since early times, is the Nativity of Saint John the Baptist, also known as Midsummer.  In lots of places bonfires are lighted in honor of Saint John.  This day is to celebrate the summer solstice.  In Ireland and in England these bonfires had their origin in the Druidic fires lighted in honor of the god of the sacred wood. Today they are known as the Fires of Saint John although a few pagan customs remain in connection with the celebration.

In France the bonfires are built as close as possible to one of Saint John’s own chapels.  It is important to have a boy named Jean or a girl named Jeanne provides a wreath to throw into the fire.  When vesper services are over the priest kindles the blaze and the evening begins with singing and dancing which will last far into the night.

In Mexico Saint John’s feast is a big affair.  Saint John is the Mexicans dearly beloved saint, especially the saint of the waters.  On this day wells and fountains are decorated bright with ribbons and flowers.  At midnight on the eve, everyone bathes: in the country in lakes or pools or rivers; in large cities the festivities center around the fashionable bath houses where swimming contests and exhibitions of diving skill take place.